League advocacy is carried out by League volunteers. We testify at hearings, provide press conference statements, write letters to the editor and opinion editorials, and submit other written communications to public officials.

The League of Women Voters of Connecticut (LWVCT) retains the limited services of a legislative monitor to track bills on which the LWVCT has a position. We also retain a part-time, paid lobbyist to support LWVCT volunteers who lobby on LWVCT legislative priorities.

LWVCT publishes a Directory of Elected Officials biennally.  The League encourages citizens to use the directory as a resource for contacting their elected officials often and let them know what issues they care about.  A printed version of the Directory will be available after the results of the special elections are known. 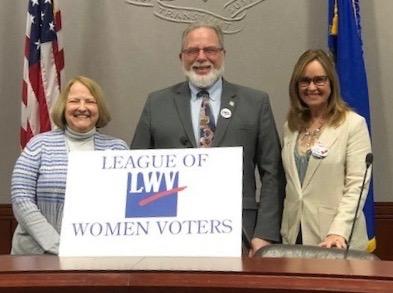 What Happened during the 2019 General Assembly Session?

We are proud of our hard working Public Issues Team who has prepared this report for you about what happened during the 2019 session to LWVCT issues.
What_Happened_Advocacy_2018-2019.pdf

For more information on what legislation passed and became law, you can read the Connecticut General Assembly 2019 Major Public Acts publication.

While Early Voting failed to get the 75% needed in the CT Senate to get it on the ballot for 2020, we will continue to encourage the General Assembly to pass it.  The legislature needs to adopt a resolution by a simple majority of more than 50% in both the House and Senate in two successive legislative terms, which are two years each.

As we will need many of the same legislators to support Early Voting when it comes before them again, we urge you to THANK your legislators if they supported it this year.  It is important that they know you appreciate their vote.

If they did not vote for it, please talk to them and let them know you hope they will support it in the next bill.

Help us pave the way for a successful majority support to get Early Voting on the ballot!

For additional information about the Connecticut General Assembly, the legislative leadership, the types of committees and more on the CGA website.

A Guide to the CGA Website - A great tool to support effective advocacy.

LWVCT actively works in coalition with others to achieve our public policy goals. Coalition work can include actions such as participating in strategy meetings, coordinating testimony and/or action alerts, attending meetings with public officials, and participating in press conferences. Coalitions are listed below by policy area; if there is a lead Coalition partner that provides staffing support, they are indicated in parentheses.

League Of Women Voters of Connecticut

League of Women Voters ® of Connecticut